The store will not work correctly in the case when cookies are disabled.

We use cookies to make your experience better. To comply with the new e-Privacy directive, we need to ask for your consent to set the cookies. Learn more.

The History Of Sweet Making

Boiled sweets are the result of boiling sugar and glucose syrup in large cauldrons to a specific temperature and then adding flavouring and/or colourings. Dobson’s sweets and lollipops are made using a combination of traditional and modern processes and the traditional techniques have changed very little over the years. 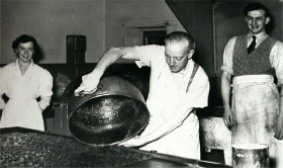 In years gone by, when the sugar boiler needed to check if the mixture had reached the correct temperature, he would immerse his hand into cold water, and then quickly dip it into the boiling mixture and then taking a small quantity of the boiling batch in his hand he would dip it back again into the cold water. This process was performed so quickly there was ‘usually’ insufficient time for the sugar boiler to burn his hand. If the mixture in the water was brittle, it was deemed ready and the batch would be poured onto the slab ready for the flavours and colours to be added. As you can imagine this was a risky process as was pouring the boiling hot mixture onto the slab.

Different temperatures produce different consistencies, from soft, fudge like sweets to hard, bullet like drops. Whilst different textures were often desired, the taste was also important and Joseph Dobson’s has become famous for sweets with distinctive flavours and to add to their originality, each type of sweet has its own shape. Colours, flavours and essences are used independently or together in the manufacture of Dobson’s sweets and these are added after the boiling batch of sugar and glucose is poured onto the slab.

Originally, coal and coke was used to fuel the cooking process and the packaging consisted of the sweets being weighed and packaged into glass jars to display on the sweet shop shelves. Nowadays, gas, steam and oil are used to cook the mixture and electronic thermometers are used to ensure the mixture has reached the correct temperature. Automated forming machines are now used to form the sweets into the correct shapes and the packing machines are now highly automated allowing for the products to be packaged into a variety of packaging formats including polythene bags, plastic jars and glass gift jars.Whilst still pliable, the mixture would be cut with large shears into manageable pieces, which would then be passed through a hand operated machine, rather like a mangle. This machine would contain the cutters which would press out the shapes, pear drops, humbugs, fish shapes etc. and then finally the sweets would be given a coating of sugar to help prevent them from sticking to each other.

As a family business, Joseph Dobson and Sons Ltd maintain a high level of commitment to their customers. New innovations, methods and machinery have been introduced in the interests of health and safety. However these new introductions have not sacrificed the traditional taste and quality which has maintained the popularity of Dobson’s products through the generations. Always conscious and proud of the traditions passed on from previous generations however constantly developing and evolving ensuring they maintain the company’s success for the future and well deserved place in the history of confectionery production.

Read on for some interesting facts about our two main ingredients - sugar and glucose syrup:

Sugar is one of the most important ingredients in boiled sweet manufacture and is derived from two sources – cane and beet. 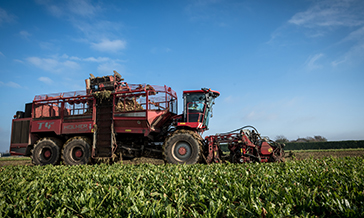 Sugar Cane belongs to the grass family and is grown in more than 70 different countries. The course stems can grow up to 12 feet tall and it typically grows in warm, tropical and sub-tropical climates.

Sugar Cane originated in New Guinea about 6000BC however from about 1000BC it followed human migration routes from Southeast Asia, India and to the Pacific where it was grown initially from the sole purpose of chewing. It spread westward towards the Mediterranean from 600AD and eventually arrived in Spain around 715AD. The Portuguese introduced sugar cane to Madeira around 1420AD and from here it quickly arrived in the Canary Islands and West Africa. Christopher Columbus transported Sugar Cane to the Dominican Republic in 1293AD. The crop was taken to Central and South America and to the Caribbean from the 1520’s onwards. Today 70% of the world’s sugar is derived from Sugar Cane however in England it now provides less than half of the sugar we use.

Sugar Beet provides the balance of the sugar we use in England and it is grown mainly along the Eastern side of the UK including Yorkshire, Essex and East Midlands. It has been grown since ancient times however it was not until 1747 that a German chemist names Andreas Marggraf succeeded in extracting sugar from beet in a form that could be used for cooking. By 1880, Sugar Beet had become the main source of sugar in Europe as during the Napoleonic wars, the British Navy blockaded French ports which prevented sugar cane from being imported.

Glucose Syrup is another vital ingredient in the production of Dobson’s sweets and this is derived from maize. Gloucose Syrup was first discovered in 1811 by a German chemist who was working in Russia called Konstantin Kirchoff. The Napoleonic wars caused a temporary cease to the import of cane sugar so in the same way sugar beet was discovered, Kirchoff carried out many experiments which eventually lead to the invention of a process of converting starch to a sugar substitute eventually called glucose syrup.